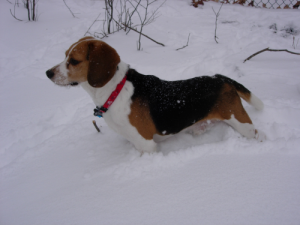 Jake is a handsome beagle about 3 years of age. Noah’s Ark, a local no-kill group, rescued him from a shelter and first brought him to Town & Country Animal Hospital because he was Heartworm positive and needed treatment to kill the adult worms living in his heart. He also needed strict confinement from physical activity for 6-8 weeks post treatment so that the dead worms didn’t cause a fatal clot.

He came through the treatment just fine. Resting him was another matter. Jake’s a high energy dude and doesn’t like to be confined. Life in a cage was an unhappy experience for him. He was thrilled when he was released from ‘jail’ and able to go for walks and play outside his cage. We thought his time with us was over when he was adopted. 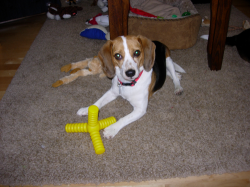 However, after two days he was brought back to us with paralyzed rear legs due to a disc problem in his back. Noah’s Ark paid to have surgery for him at The Ohio State University Veterinary Hospital. The surgeon gave a very guarded prognosis for Jake ever to be able to walk again. He was again confined to a cage to recuperate from surgery. Our happy-go-lucky beagle was gone. He sulked in his cage and couldn’t seem to understand why his back legs wouldn’t co-operate.

Our staff performed the physical therapy exercises on him faithfully. The ladies from Noah’s Ark spent a lot of time visiting him. Even getting him out of the cage for short periods brightened his mood. When he was taken back to Ohio State to be rechecked by his surgeon, the prognosis was a little less guarded. We were told to begin his aqua therapy in addition to his other range of motion physical therapy exercises. Eventually Jake progressed to ‘Walkin’ Wheels’, a type of pet wheelchair. He didn’t seem to mind the wheels, but on an indoor carpeted area he scooted along even faster without the wheels! He loved being out of his cage so much that he took to spending his days in the upstairs office area. He went back to playing ‘fetch’ with his favorite toys. At his last visit to Ohio State the surgeon was so impressed with his progress that Jake became the subject of a short film. 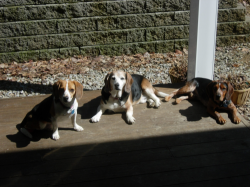 And now – the rest of the story—Jake has been adopted by a loving couple from Morgantown, West Virginia, who had just lost an elderly beagle. He has two ‘brother’ beagles, one of whom was also a recent shelter rescue by the couple. His new ‘mother’ is studying physical therapy so she’s able to keep up with his therapy. She also sends us pictures and accounts of his adventures on their large, wooded lot. He’s now able to play and hunt to his heart’s content. We’ve been told that he even wears out his new ‘brother’ who is about the same age! He’ll soon be working on his training to be a therapy dog in hospitals and nursing homes. We know he’ll bring inspiration to all sorts of people with his energy and loving attitude.